Texport is a tool that was built to migrate content between Alfresco repositories, in the most easy and clean way possible. It was developed with a special focus on doing a fast migration even of repositories with large data sets.

As a “deep dive”, the objective of this article is to explain in a more specific and technical way, how it works. Nonetheless, if you want, you can check more generic information about the Texport tool in here!

First export and then import

A deep dive into Texport – The export

Right from the beginning, our thoughts were on performance. So, while architecting the tool, we decided that the best programming language to use was python, since it has a close relationship with the operating system, and we can fully optimize it.

Alfresco already had a previous solution to extract content, the ACP. However, it doesn’t work very well for large repositories, since any operating system will struggle while processing large sized files. It is common for users to get memory leak problems while generating and/or consuming these ACP files.

Texport follows a different approach. Instead of saving everything in one package, the repository folder structure is replicated into the file system. You will have all of your content in your OS file system, and in the same folder structure. This way, we don’t have any memory problems while generating the extraction package.

Taking advantage of the of the Alfresco REST API

To perform the extraction of content we use the available Alfresco REST API. We crawl the repository starting by the root node and calling the list node children REST API, and then if we find a node of type cm:content we download it and retrieve its properties and metadata.

The most time-consuming operation when extracting large repositories is to crawl through all the content. A possible solution to do this is to use the recursive approach. Yet, it’s not the most efficient approach! Unless we could run our recursive function in parallel. Well, Python allows us to do this in a couple of ways.

Just to give a little context, the main difference between these two options is that threads run in the same memory space, while processes run in a separate memory.

Since processes run in a separate memory space, it’s not easy to share objects between processes with multiprocessing. And since threads use the same memory, precautions have to be taken by the Python libraries, or two threads will write to the same memory at the same time. A Python global interpreter lock was created for this, preventing a real parallel multithreading.

In our specific case, there’s no need to share objects between processes. Each process will call a specific and independent REST API and download the content to a specific path. It was decided to use a multiprocessing approach. Using this approach, we can use a true parallel processing and have a better performance than the multithreading approach.

Adding multiprocessing to the recursive function 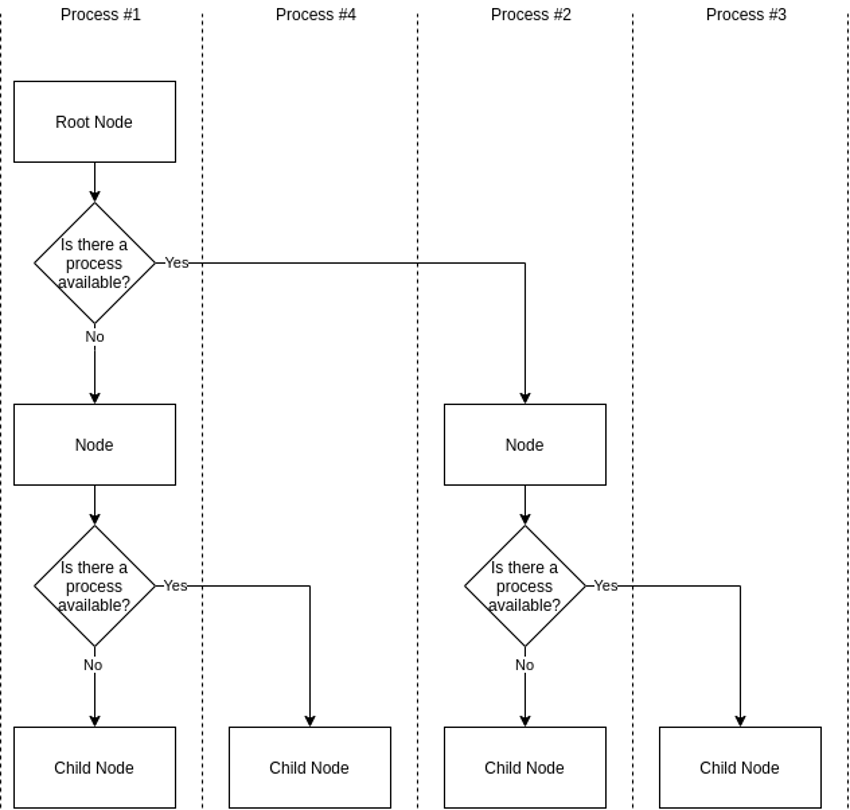 This way we can improve the performance of the export depending on the machine it is running, simply by editing a property in the properties file.

A deep dive into Texport – The import

Since Alfresco already provides a well-built import tool out of the box, we thought that we didn’t need to reinvent the wheel. We used the bulk import tool, by Peter Monks as a base. We adapted it to work seamlessly with our export tool and added some for features that weren’t available. The original tool uses the Alfresco Java API to perform the import and has two options of import.

This option is where the content is located in the hard drive, but in any specific location. Before starting the import, the user must define the path in a property, to point to the extracted package. After that it will stream it and import it. It’s a simple upload and not very fast.

On the other hand, when the content is in-place, meaning that the export package is already located in the destination Alfresco content store, instead of a normal upload of content, the import will only convert the files into binaries, making the import much faster. In fact, one of the main features of the import tool is the possibility to do the in-place import:

Since we are building a migration tool, and we have total control of the location where the export package will be stored, plus the in-place migration is a much better option in terms of performance, we adapted the bulk import tool to only work with the in-place import.

Export with the eyes on the import

This export is made in the context of a migration. It’s not just only an export that retrieves data efficiently and downloads it onto the filesystem for it to be there as a simple backup. The objective of this export is to retrieve and prepare the data for it to be imported after the export is finished. That’s why the Texport is a tool that needs to be installed onto the Alfresco destination instance – the Alfresco instance where the migration will take place. The following image shows the view of the architecture: 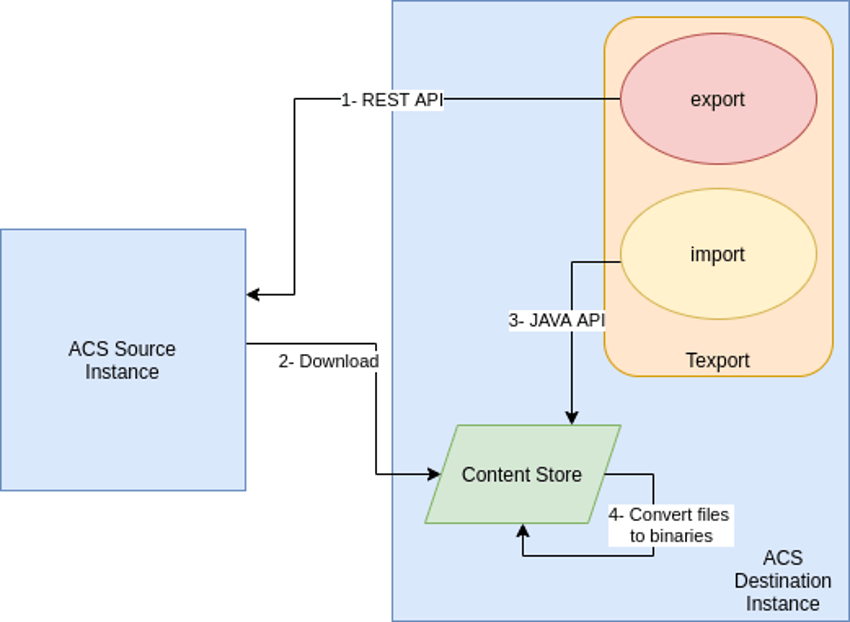 In blue, we have two instances of the ACS, on the left side the source and on the right side the destination. In orange, we have a representation of the Texport tool installed on the ACS destination instance. The migration is explained in a number of steps:

After the import finishes, the content will be available in the ACS destination instance.

We now have the main content covered up, meaning the files and the folders. But the Texport tool can migrate some other things such as:

The same goes for versions, with the difference that now each version will have a new file. For instance, if we have a file ReadMe – Alfresco in the Cloud.pdf, each version will be in the same path, and will be having the suffix .v[number of version].  In the next image we have an example of a package containing a file with versions: 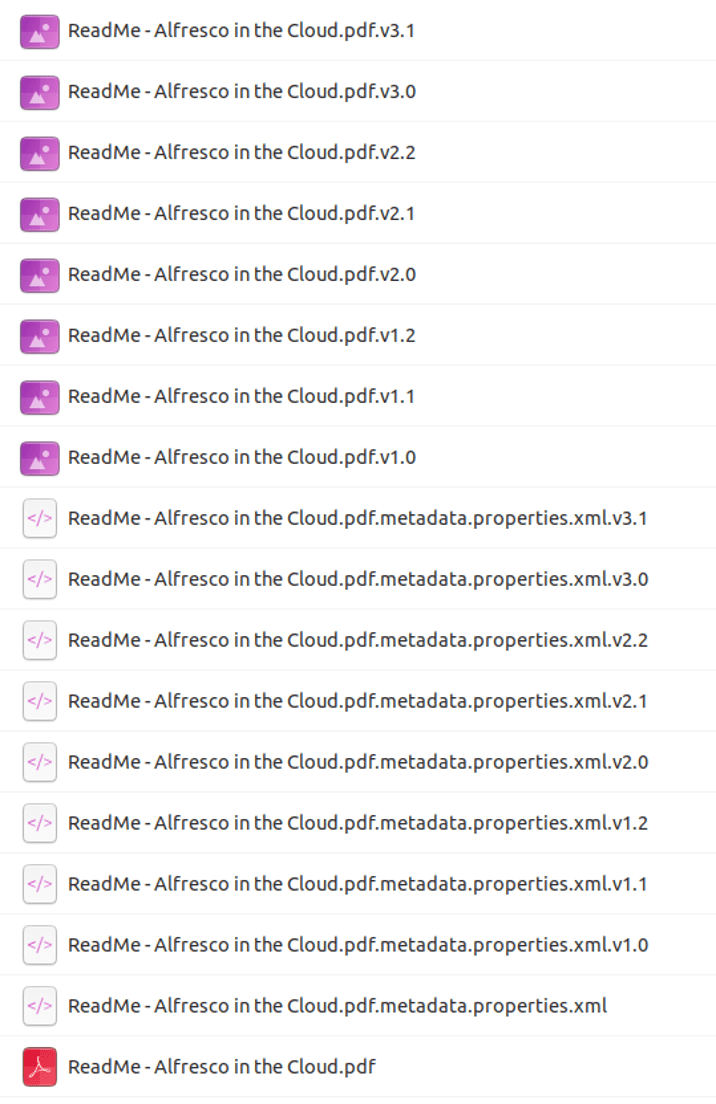 And each file will have each a .metadata.properties.xml corresponding file as well. After the import, we will have: 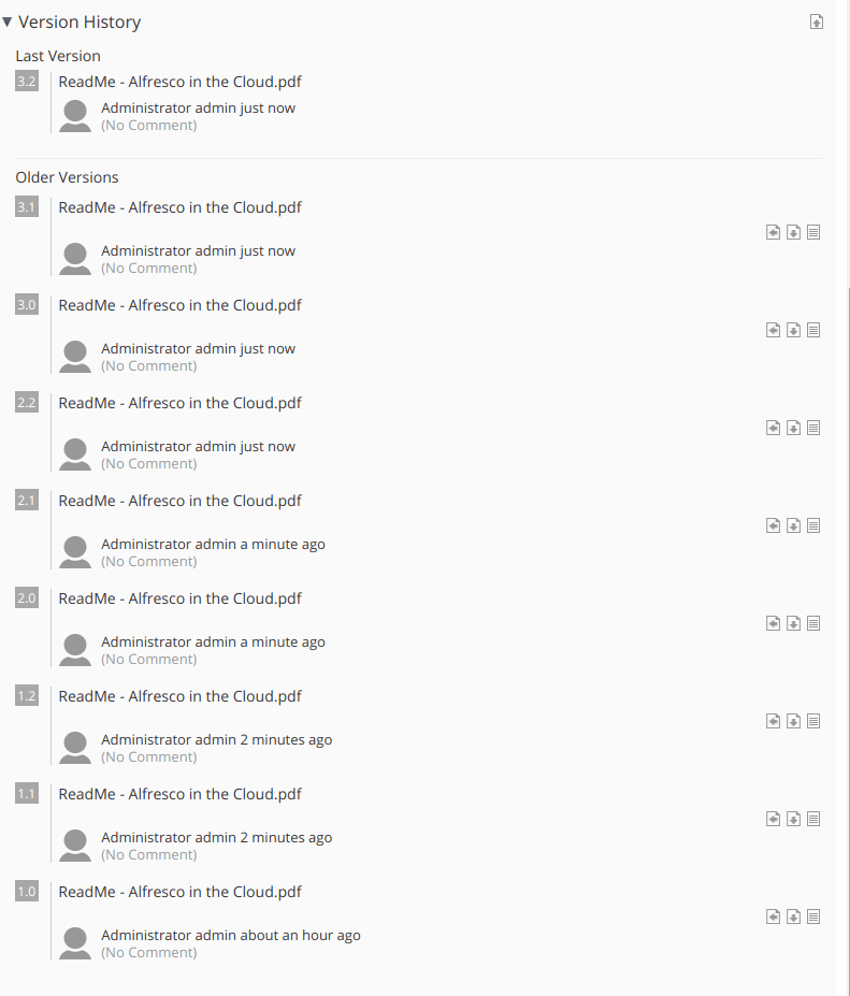 The versions will correspond with the number after the .v of the files. The last version will be the 3.2 and corresponds with the file “ReadMe – Alfresco in the Cloud.pdf”. Due to the fact that it’s the latest version, it didn’t need the extension .v3.2.

So far, each of the previous features are exported and will be imported in real time, this means that it will be imported as soon as the importer thread is crawling the content store. But for the relations that is not as easy since a node can have a relationship with a different node that is in a completely different place of the repository, and the import must have all the nodes imported before it can set the relationships.

With this in mind, the solution was to store all the relationship information of the nodes in a folder in the root of the export package, referencing the node ID. Upon the import, we added a post-processing function that will read the contents of this folder and will set up the relationships after the import ends.

We decided to group the tags and categories in this section because we migrate them in the same way. The only difference is that the categories have a hierarchical structure unlike the tags.

Still, to export the information we continue to use the Alfresco REST API, but instead of creating a new file, we add the information on the metadata properties file. Upon importing, we basically create the values if they don’t yet exist, and after that we associate them to the node, after creating it.

All sites and site information will be exported in a json file that will be located in the root of the package. After the export is finished, the import tool will check for the existence of this json file and will create all the sites.

The export tool can export information related to users and groups, but the import cannot create them. Since the REST API doesn’t return passwords due to security constraints, it’s not possible for the Texport to migrate users or groups. The only thing it can do is to update/synchronize user and group properties.

And this is it! A deep dive into a tool that exports and imports at object level supporting all Alfresco object types and it carries the symbology of true export. If you like it, please send your comments, your feedback is very important for me.

Texter Blue was born by the merge of 2 companies, bringing together experience building machine learning and computer vision software since 2010. We work within a specialised partners network, allowing us to grow our workforce on demand, and deliver enterprise-grade software while creating a wonderful customer experience.